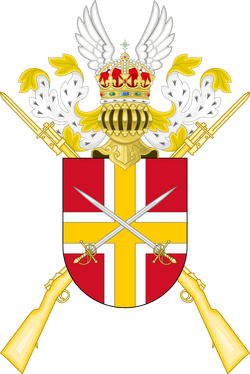 The Armée Imperiale is the official denomination of the army of the Empire of Castaire since its establishment. It consists of the joined forces of the former independent states which now belong to the Empire.

The Supreme Leader is the Empereur, currently Stéphane IV. The different contingents of the constitutional states were, as of the military convention, under Castairian command. The only exception is the army of Gardelegen, which concluded a treaty with Castaire.

The army of Gardelegen remained under the local command of the Grand Duc in peaceful times and was administrated seperately by their own ministry. All the other stately contingents are directly integrated into the imperial administration.

Nearly 0.8% (planned 500,000 people) of the population of Castaire are participated in the Armée Imperiale.

As threatening nations neighboured the Empire since its establishment, an important thought was to conceive a permanently working system of defending the imperial borders against foreign ambitions. Mercenary companies were often hired when in conflict with other nations, but there were severe problems regarding the supply of the troops, often ending in depredation of territories. Thus, several attempts to create standing armies were made. In Castaire, Constant IV introduced this conception in 1423, but due to his untimely passing a year later wasn't able to see the success of it.
Regarding the Réforme de l'Armée de 1423, a permanent army was founded, consisting of regiments of each duchy. The central government of Castaire was in charge of paying the sold, but the actual billeting and maintenance were task of to duchies. This system was used for around 250 years, but was abolished by the Réforme de l'Armee de 1688 under Nathanaël I. His staff conceived a combination of permanent conscription for 2 years of active service and further 10 years of reserve service and a defined area to draft within. In case of war this would allow the Empire to quickly mobilize the active army within several days and to prepare the reserve within a week. The organization evolved further as a general staff was founded under Nathanaël II to conceive battle tactics, choose places for camps etc. to support the monarch. Following the evolution of war from merely confined skirmishes to extensive theatres, the general staff became an irreplacable part of the castairien military.

The Armée Imperiale consists of different regiments, organised in infantry, cavalry and artillery. Every territory, region, county or duchy has to provide a certain amount of soldiers regarding to their population. These numbers are solidified by the amount of regiments each duchy has to support. Depending on the campaign, different regiments might be subsumized to brigades and make up their own fighting forces then, commanded by skilled military leaders. Nonetheless, the training of the army takes place as set in the regiment structure, so every regiment has a specific location in the Empire and thus a specific drafting pool, from which men are recruited. Depending on the size of a set county, it might support more than one regiment. The regiments are often named for their origin, with some old regiments retaining a special name because they were founded before the establishment of the new system in 1688.

As of 1757, the Armée Impériale fields 150 infantry regiments, of which 25 are light infantry regiments and 90 cavalry regiments. It is to be noted that this is the planned strength in case of conflict. Alltogether, this accounts for around 500,000 men. The reason for the excessive size of the Castairien army is Castaires location, where it had to fight numerous multi-front wars. To keep all the borders protected, there is a massive fortress building program under progress.

The following table shows the structure of the army.

As of the technical advancement, there are several new branches established in the army, especially regarding to the relatively new aspect of train transportation. Furthermore, several former existing units were enlarged and supported with new devices, for example the pionier corps. 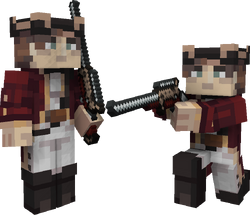 The standard infantry uniform consists of a dark red long-skirted coat, white waistcoat and breeches and a black, golden-trimmed tricorn.

The system of castairien ranking is mainly based on the old Chastain System, which used to subdivide the different main ranks like the Généralité into further subranks to have a special officer for any army formation.
The highest rank is Maréchal d'Empire, Marshall of the Empire, and is mainly conceived for highly experienced tactitians and former generals who served the Empire in great manner. The marshall is one of the ranks allowed to command whole armies. His main purpose is to represent the Empereurs command when being absent.
The second highest rank is Général, whose function is very similar to its higher ranked counterpart, though a marshall often commands different generals.
The Lieutenant-Général is similar to a corps commander and is thus allowed to command those.
The Majeur-Général is similar to a division commander and might command those and subordinated army structures.
The lowest general rank is the Brigade-Général, whose position is conceived as commander of brigades.

The regular troops, organized in regiments, are commanded by a Colonel, whilst the subordinated battaillons follow a Lieutenant-Colonel or an Commandant. The different companies are then subordinated to a Capitaine and his staff.